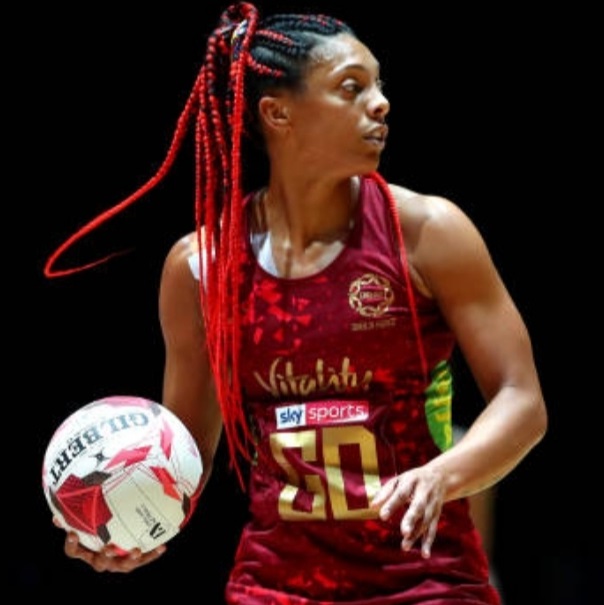 Birmingham 2022 will provide an opportunity to send a powerful global message about human rights - and it should not be missed, says England medal hope Stacey Francis-Bayman.

The 34-year-old - herself a “proud Brummie” - is a guest on ‘The Pride House Podcast’, the new series from Pride House Birmingham for which she is an athlete ambassador.

The podcast explores connections between Commonwealth sport and LGBTQ+ rights by pairing up athletes, coaches, officials, and organisers for conversations with those who are campaigning for equality across the Commonwealth.

For episode 3, Francis-Bayman is joined by Khakan Qureshi, the founder of the Birmingham South Asians LGBT ‘Finding A Voice’ group.

With over 70 international caps to her name and having won medals before at both the Commonwealth Games and the World Cup, Francis-Bayman is a hugely respected figure within her sport - and she is also a role model for LGBTQ+ people.

Currently in action for West Coast Fever in Australia’s Super Netball competition, she tells the podcast that sport has a responsibility to advocate for inclusion, and even more so during a Commonwealth Games hosted by a British city.

“Something that really grinds my gears and that I hear all the time, especially since being in Australia, is that sport and politics don’t mix, and it drives me mad!” she tells host Jon Holmes.

“I’m not just an athlete. You don’t get to just consume who I am by the way in which I throw and catch the ball on court. That isn’t the legacy I want to leave. That isn’t the messaging that I want people to take away.

“Whatever we consume and whenever we watch, you should also be able to pause and think about athletes as holistic human beings and not want to be oblivious to who they are and what they stand for.

“I firmly believe that sport is a fantastic space to be able to push and drive home really important messages. If you’re coming from a position of power - like England and the UK certainly is - it would be a shame and a waste to not influence and support other countries.”

Pride House Birmingham, located in the heart of the city’s Gay Village, will open its doors on July 22, a week before the start of Birmingham 2022, offering a safe and inclusive space for LGBTQ+ visitors and allies and a varied programme of events and activities.

For Qureshi, who is part of the venue’s Advisory Board team, it’s a chance to celebrate the multicultural diversity of the West Midlands and demonstrate how representation like that provided by Francis-Bayman and fellow out athletes can help to drive positive change.

The campaigner was awarded a British Empire Medal in the 2021 New Year’s Honours List for his extensive work around LGBT equality in the region.

“I think it’s really good for Birmingham, to show visibility and authenticity and to say that we’re just ordinary people at the end of the day.

“Being LGBTQ+ is just one part of our identity but we have to look at the whole aspect of our being. Having people of colour come through to talk about it is admirable in itself. When I was growing up, I didn’t have a role model.

“For the next generation coming through, to have somebody that they can turn to and look up to like Stacey, is a good thing. With social media nowadays, you can spread understanding and share that information so people don’t feel alone any more.”

Among other talking points in this episode, Francis-Bayman and Qureshi compare their experiences of growing up LGBTQ+ in the Birmingham area; the evolution of LGBTQ+ rights in Australia, and India; and their visions for what Pride House Birmingham can offer.

There is an ongoing recruitment drive for volunteers to help at the venue in July and August, with Open Days to be held in Birmingham on Sunday, May 29, and Sunday, June 5. Those interested can sign up via the PHB website where more information is available.

To access the Pride House Podcast, and listen to the first two episodes which focus on the history of Pride Houses at the two most recent Commonwealth Games, go to: https://podfollow.com/the-pride-house-podcast

Stacey Francis-Bayman on being authentic as an athlete playing elite netball in Australia:

“I don’t think I ever go into any environment within the community specifically to advocate for netball where I censor parts of myself. I’m very mindful of pushing the things that are important to me and what I stand for. That’s being a British person, and being from Birmingham. Although nobody here knew where Birmingham is until the Commonwealth Games got put there! So although I can’t push being a Brummie as much, I’m definitely proud to be English, and I’m an import playing in the Australian league, I’m a mixed race woman, I have a black dad and a white mother, I am bisexual, I’m married to my wife Sara, and I love to talk about the two weddings that we had! I think there’s a lot that I try to draw from in terms of letting people get to know me and who I am, in the wider context of not just being a West Coast Fever player or an England netballer. This is me and who I am, and all of these things have led me to being in this fantastic position and also to be playing netball.”

Khakan Qureshi on the importance of role models:

“It’s wonderful that we have Stacey who is a woman of colour and who is proudly talking about her identity as well, in the respect that there aren’t that many role models out there. Especially in Birmingham, it’s fantastic that we’ve got somebody who can use their platform to educate people. That’s what I keep saying within the minority groups in particular, with myself coming from a South Asian background, that we do need people to step forward, and talk more about what it means to be part of the LGBTQ+ community. It’s also about sharing that narrative and knowing that we are validated. We don’t need to justify who we are - we just are.”

Stacey Francis-Bayman on wearing rainbow braids during a Super Netball match during Pride Month in June 2021:

“It was something that I decided on my own. There are a lot of difficulties with getting your whole team or organisation involved in things that you do. But what I felt really supported by was everybody’s response and reactions. I wear braids when I play anyway - which are typically green, for the team colours that I play in - but for this game, I had them rainbow. The lady that braids my hair is incredible and she braided my hair into a DNA strand, just to really hit home the fact that being bisexual is a part of who I am. It’s not an add-on. It’s just me. I felt incredibly confident and comfortable to do that. But I’d love for whole groups and organisations to get on board. That has much more impact rather than individual athletes or advocates having to stick their neck out all the time. It makes the voice and the message much more powerful. People I think and hope know who I am and know what I stand for, and I’ll continue to shout about that in the most positive and enthusiastic of ways. But the louder we can shout and the more voices we can have shouting, the better.”

Khakan Qureshi on growing up gay in Birmingham:

“I’m a child of the 70s and I came through the 80s. My coming out experience was a time of Section 28, HIV and AIDS - those were aspects of life that were very much taboo and stigmatised. The other side to that is because I come from a Muslim background. We’re educated in our own way, by people like family or those around us, to say that being homosexual in particular is haram or forbidden. That obviously has an impact on the way I’m feeling and trying to navigate myself… It’s only maybe in the last 10 years that Birmingham is beginning to realise that LGBTQ+ individuals come from all walks of life, all different communities and different faiths. As a city, I think we need to promote that a lot more than what we have done. We need individuals who are willing to step forward, who do have voices, who are authentic and who can be role models for the next generation. I’m hoping that with the Commonwealth Games, Birmingham can reconnect with people of colour in particular. Let’s educate and celebrate who we are.” 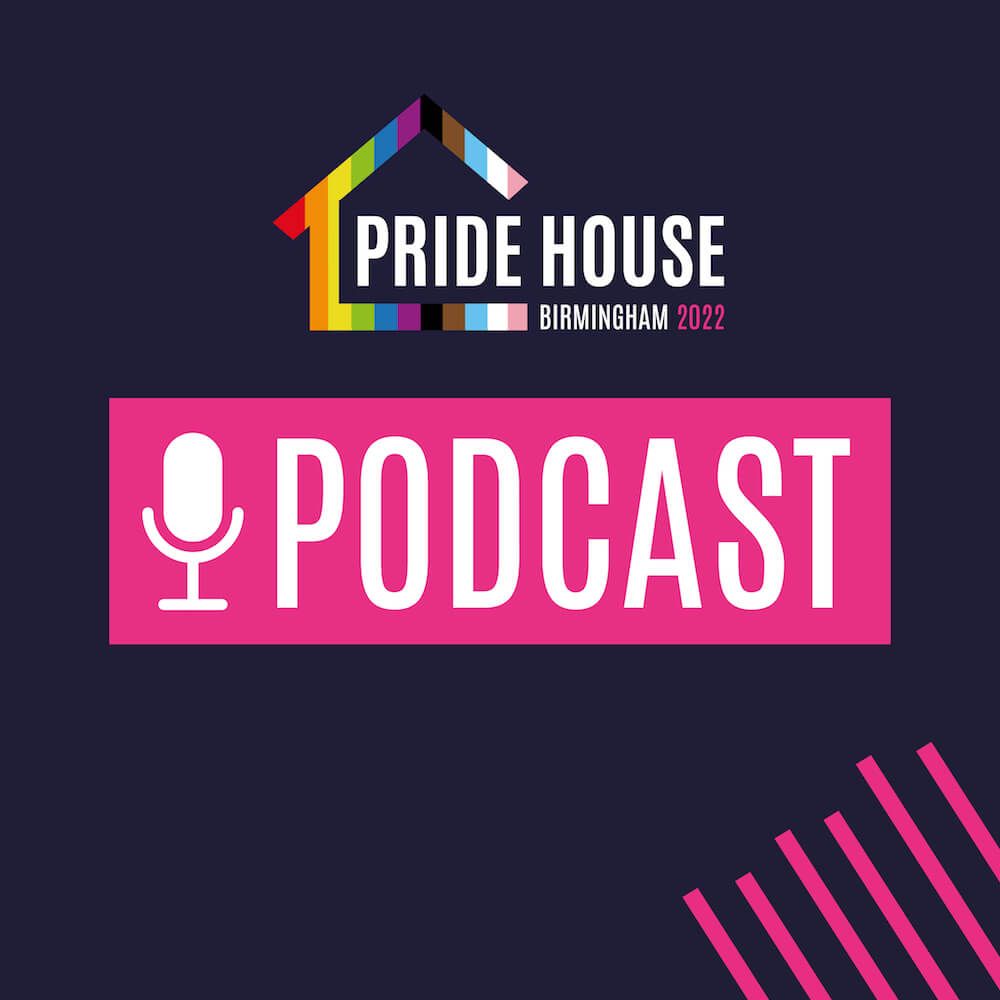 Stacey Francis-Bayman in action for England Roses against Jamaica 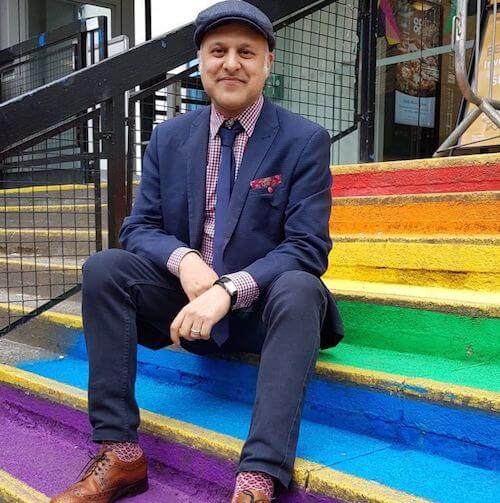