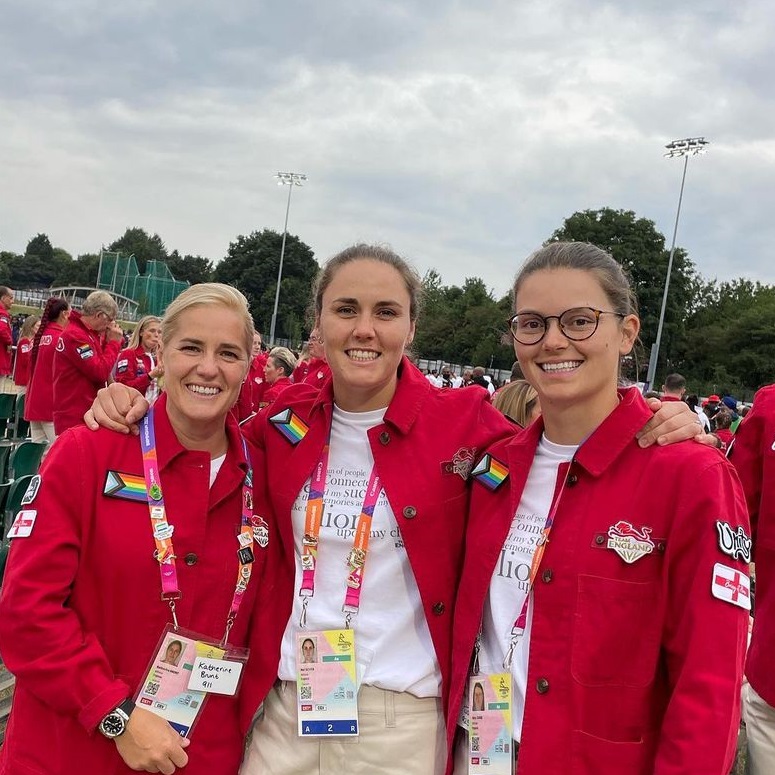 At least 40 out LGBTQ+ athletes at Birmingham 2022 Commonwealth Games

Greater LGBTQ+ visibility and awareness in Commonwealth sport is being reflected in a threefold increase of publicly out athletes at Birmingham 2022 when compared to Gold Coast 2018.

Research by Sports Media LGBT+ for Pride House Birmingham (PHB) - working in conjunction with the Midlands-based historian Tony Scupham-Bilton - has indicated at least 40 publicly out athletes so far at the 22nd edition of the Commonwealth Games, which began on Thursday night with a spectacular opening ceremony in which rainbow flags featured prominently.

🏟🏳️‍🌈🏳️‍⚧️🖤🤎 @TomDaley1994 leading a group of #LGBTQ+ activists into the #B2022 Opening Ceremony - a hugely powerful moment in the Alexander Stadium… #CommonwealthGames2022 pic.twitter.com/wWJx32jEs3

Many members of this group of athletes were also included in the Outsports lists celebrating out Olympians and Paralympians who competed at Tokyo 2020, on which Scupham-Bilton was a key contributor. His blog The Queerstory Files is an invaluable source of community history.

The Outsports lists published last summer only featured athletes who have come out publicly in the media, or who are clearly out on their public-facing social media. This new list for the Commonwealth Games has been compiled in the same spirit of celebration and uses the same criteria, with Sports Media LGBT+ having connected with the vast majority of those named as part of the PHB project.

Four years ago, at the Games in Gold Coast in Australia, only 13 competing athletes out of a total number of 4,426 were publicly out as LGBTQ+. That number included England gold medal-winner Tom Daley, whose appearance as a batonbearer alongside six activists bearing Intersex Inclusive Progress Pride flags at the Alexander Stadium on Thursday night was watched by a global audience of around a billion people.

Four-time Commonwealth champion Daley is taking a break from diving and is therefore not among the 5,054 athletes competing at Birmingham 2022. Within the group of 40, there are 35 women, four men, and a non-binary athlete.

There will, of course, be other LGBTQ+ athletes taking part at Birmingham 2022 who would welcome the opportunity to be part of this representation at the Games. We invite them to get in touch by simply connecting to @pridehousebham on social media and sending a DM, or by emailing jon@pridehousebham.org.uk.

We also welcome suggestions from members of the LGBTQ+ community and from allies that meet the criteria mentioned above, via the same ways of getting in touch.

In terms of sports at the Commonwealth Games, cricket provides a quarter of those named in the initial group of 40 out athletes, with the women’s T20 tournament having started on Friday. Athletics and rugby sevens provide six out LGBTQ+ competitors each.

In total, Team England has the biggest number of athletes taking part at Birmingham 2022 with 437, and the host nation - who provided those walking in the Opening Ceremony with velcro Progress Pride flags for their customisable jackets - also has the most out athletes so far, with nine featuring in the group of 40.

Next is Australia with seven, then New Zealand with six. The Scotland wheelchair basketball 3x3 team is particularly noteworthy, with three members of the squad being LGBTQ+ and out, including PHB Ambassadors Robyn Love and Jude Hamer.

In the Exhibition Room at the main PHB venue in the city centre, visitors can see a slideshow of photos provided by over 50 out LGBTQ+ athletes from Games past and present accompanied by inspirational messages about Pride.

The display also features the three additional PHB Ambassadors who are not competing at Birmingham 2022 and several active allies who welcomed the chance to show their strong support for their fellow athletes who are LGBTQ+. There are at least 75 former Games athletes who are out, with Tony Scupham-Bilton set to publish his full updated research in the coming week.

Meanwhile, to help reporters from around the world who are covering Birmingham 2022 and who are interested in stories relating to inclusion, Sports Media LGBT+ has produced a new free-to-download Media Guide which is endorsed by the Organising Committee and by the Commonwealth Games Federation.

Note: Sports Media LGBT+ is aware of five more publicly out LGBTQ+ athletes who were either named as reserves for Birmingham 2022, or were initially selected but later withdrew. They are:

Sports Media LGBT+ / Pride House Birmingham is continuing attempts to connect with LGBTQ+ athletes and seek their permission to include their names in this article.

The above group of 40 does not, of course, include the coaches and trainers who are LGBTQ+ in Birmingham. Many are former Games athletes themselves - a further article about past competitors is planned for later in Birmingham 2022.

This list was compiled by Jon Holmes of Sports Media LGBT+ and Pride House Birmingham, and LGBT historian Tony Scupham-Bilton. For all enquiries pertaining to this list, please email jon@sportsmedialgbt.com.